Timing is Everything - GMOs Part III 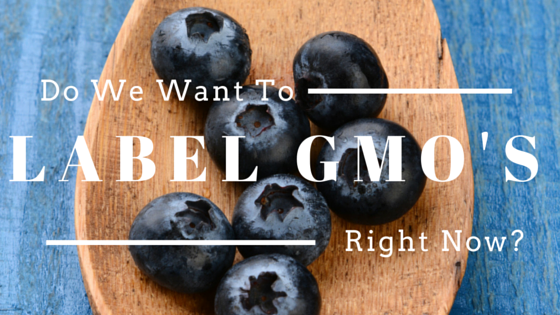 Why NOT to label GMO’s… Yet

So, I know that I won’t win Gwyneth Paltrow’s “Popularity Contest” regarding her stance on GMO’s. C’est la vie! However, I am happy to see that because of celebrity activists petitioning their local politicians, they are keeping the spirit of this debate alive and well.

Since we are on the topic of debate, I do want us to give good thought as to why we should NOT label GMO’s…right now.

The beauty of being a scientist is that I don’t have to worry about what my Twitter and Facebook trolls think. If there is anything that a career in QA will teach you, it’s how to take a step back and think analytically vs. thinking with my Instagram or Twitter account. I know that I am going against the grain here, but I think that we as a country are not yet ready to label GMO’s.

People are typically afraid of the unknown, and that which they do not yet understand. This is why I believe that educating the public through unbiased studies and appropriate channels will yield better understanding of the subject. Whether that knowledge is for or against the labeling of GMO’s, it is still everyone’s right to have access to proper education on the matter.

Lack of Proper Research – Or So Everyone Says

Yes, I am aware that there are numerous studies out there on GMO’s. I am also quite aware that both sides of studies may draw polarizing support from the proponents and opponents. Let me ask you this: As we do with all of our food processes, why not apply HACCP to GMO’s? Why not use the one tool all QA’s are quite familiar with, and scientifically validate the likelihood, severity, and risk of a hazard GMO’s pose to the consumer?

Both sides seem eager to jump to a conclusion on the topic of labeling. However, oddly enough, not enough discussion is taking place regarding the ailments or benefits of GMO’s. If both sides can all agree to independent laboratories that will appease both parties requirement for scientific research, we should be on the right track. As a QA Manager I like data. It’s like a warm blanket of assurance that lets us know, “Hey. It’s all going to be just fine.”

We need proper research so we can come to a unanimous conclusion, instead of being threatened and coerced. Decisions regarding food regulatory affairs should never be made based on fear.

“Just a minute! Something's happening! Ladies and gentlemen, this is terrific! Good heavens, something's wriggling out of the shadow like a gray snake. Now it's another one, and another. They look like tentacles to me.”

So what does Orson Welles’ 1938 broadcast of “The War of the Worlds” have to do with GMO? Panic!!!!! Just like thousands of people who were glued to their radio’s in 1938, today in 2015 millions are glued to their TV’s and cellphones, and even more mesmerized by the news than ever before. Unfortunately, just like “The War of the Worlds,” which was a science fiction story, many internet sources have opted to skip reporting facts and decided to incite pointless panic. A panic like the one we saw in the beef industry in 2012 would be just a grain of sand in comparison to the fear and job loss rate GMO’s could create.

Would I like to see GMO labeling on product boxes? Sure, but not right now. Why? Because currently it seems that both sides of the aisle are just yelling at each other without anyone actually paying attention to what the other is saying. Once we can start to listen to each other’s concerns, we should be able to establish some rules and regulations.