Is It a Food Recall, or Just Gwyneth? 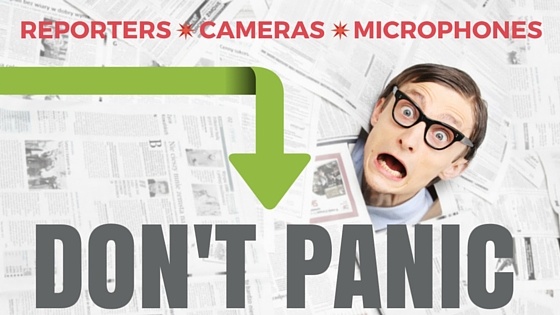 Let’s be honest for a second: Having media covering your facility is not a part of the daily norm. It likely means one of three things.

1) Someone in your department is dating Gwyneth Paltrow. What? It could happen!

2) Your business is exceeding all stock market expectations, and WSJ and Squawk on the Street are sending their reporters.

3) Something horrible has happened.

As much as we might hope that we’re talking about options one or two, historically, Hollywood Mega-Stars typically don’t date us scientists (Not so fast Tony Stark). Also, neither the Wall Street Journal nor CNBC regularly send reporters in droves when it’s good news. Chances are that something not so pleasant happened, and you suddenly have loads of publicity.

Here are some tips on how to handle the stress of the public media.

Maybe you took debate and public speaking classes throughout your high school or college years, and now you think you can handle yourself in front of a news camera. Or you just want to give a “Shout-out” to some of your friends back home. Whatever the case, you must accept the fact that you are probably not the most qualified person to speak for your company. Every company should designate a spokesperson who will be placed in charge of all media communications. You should ensure that all employees at the time of their hire and throughout the year know who your spokesperson is and how to reach them. This way, if approached by the media, they can quickly and politely forward all media questions to that person. Large companies such as Nestle, Pepsi, and Coca-Cola, have entire teams of professionals who field public media inquiries on a daily basis.

Talk to Your Employees

Put yourself in your employees’ shoes. Just like you, they also have families that depend on their income. Even if you don’t know what the outcome will be, you should still keep one foot grounded with your employees. When dealing with a huge public issue, it’s good to meet briefly with your employees in order to assure them of what is being done through each step of the ordeal. After all, we are all in the same boat. An example of complete confusion amongst employees during a huge media outcry was observed during the “Pink Slime” fiasco in 2012. Social media spread the misinformation so rapidly, that over 1,000 people were laid off in a matter of six weeks.

While some of us here in Los Angeles are quite fond of the media, not everyone knows how to deal with the pressure of having a camera or a microphone in their face. Also, let’s face it, reporters can be pushy, which could lead to unwanted confrontation between your staff and the media. In this case, as you are holding your daily “crisis” meetings, send out reminders or memos to your staff. These memos should consist of basic information like how to handle social media, I’ve heard of companies that have imposed a social media black-out to their employees. Also, another important instruction to include: Employees should NEVER engage in any physical or verbal altercations with the media. On top of everything you are all dealing with, a 5-to-10 battery-assault charge definitely won’t win you any brownie points with the public.

Whenever I see reporters asking direct questions, and the response is, “no comment,” I can’t help but cringe. We’re all thinking the same thing: “What is he trying to hide?” I truly believe that if approached on the street by a reporter, the “no comment” response should be avoided at all costs. It could backfire on you, making you, and by extension, your company, look guilty. On the other hand you could become a YouTube celebrity over night, even if you didn’t want to.

Thankfully, here in the USA we are innocent until proven guilty. But with today’s instant media streams, the public often draws its own conclusion before a trial even begins. Politely field any questions to your facility spokesperson. Let him or her sweat under the bright lights, and you can go back to your exciting life in QA or the boardroom.

Remember, “Any publicity is good publicity” does not hold true in Food Safety. Save the sensationalism for when you really are dating Gwenyth Paltrow.