Batten Down the Hatches, It Looks Like a Recall 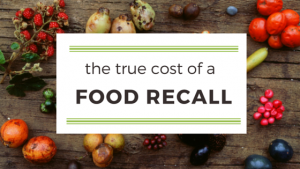 To a QA professional, the word "Recall,” is one of the most terrifying terms you can hear. Not only is it a highly public ordeal, but the aftermath of a recall can be immeasurable. Here are a few examples of what could happen to you, and your company, if you suffer a recall.

And, if you're lucky, this is the least of your problems. The reason one’s services are usually terminated after a recall is because you let the recall occur in the first place. Idioms such as " you let it happen on your watch," " you dropped the ball,” and "boy, you really messed up" come to mind. But what if it wasn't your fault? What if the issue was caused by someone outside of the QA department? That person will get their shellacking as well, but as a QA professional for the facility, you bear the responsibility to train everyone and to implement programs that prevent these types of incidents in the first place. To add insult to injury, the chance of you finding employment somewhere else soon will be diminished. You'll be the proverbial stinky kid in class for a long time.

With the passage of the 2002 Bioterrorism Act, and the 2010 Food Safety Modernization Act (FSMA), the law will come down on you to the fullest extent. This doesn't just mean a citation or a court fine. No, I'm specifically talking about doing hard prison time. How much time, and in which penal system, depends upon the extent of the recall and how deliberate the actions were that caused, or prevented, the recall in the first place. When I train new employees on the importance of being vigilant and reporting malicious acts, I always use the 2009 Food Safety Recall for Peanut Corporation of America as a textbook example of how bad ethics and looking the other way in the name of profit, resulted in deaths of nine innocent people and a life sentence recommendation for the owner, Stewart Parnell.

Not only might the guilty parties be arrested and prosecuted for malicious negligence, but the sheer amount of money involved often means the end of the company itself. You may ask, "Don't they have insurance for issues just like these?” Yes, but is that insurance coverage enough? Many recalls can cost millions of dollars, with some reaching over $100 million US. In addition, the public often stops eating that particular product after a recall. One of the worst recalls that caused a major agro-economic debilitation was the 2006 Popeye's Spinach E.coli recall. Not only did people stop buying Popeye's spinach, they stopped buying spinach from other producers, causing a loss of $350 million dollars in revenue. A loss in sales and brand reputation of that magnitude typically necessitates laying off thousands of hard working people.

For a lucky few, food poisoning is just uncomfortable. Unfortunately, negligence in food safety could kill a child, adult, or elderly person. Reasons why people have died in the past can vary from the pathogen that they consumed, to just being immunocompromised. This means that if you are currently suffering from an illness that causes an inability for your body to fight off disease or infection (e.g. HIV, Leukemia), a food borne illness could lead to deadly consequences.
Although this is an emotionally charged topic for many food manufacturers, we can’t simply ignore it. We must be ready at all times. Having a sound Food Safety/HACCP plan, scientific CCP validations, mock recall drills, and proper supplier management through The AQA System, will only make your facility food safety program stronger.